Once upon a time I used to be pretty active in ham radio. One of the fun parts was exchanging QSL cards to make the contacts official. The cards were often interesting to look at, especially those from overseas stations. Exchanging QSL cards could get to be a pretty expensive part of the hobby if there were a lot of foreign contacts, so QSL bureaus were set up to defray the cost. The concept was simple: send and receive your cards with a local (i.e. within a few states) bureau, and they would bulk mail large quantities of cards between countries. The bureaus work pretty well save for one thing: they’re slow.

I’ve not been on the air in any substantial capacity for quite a few years, so I was very surprised to see an envelope from the Ninth District QSL Bureau sitting in my mailbox this evening. On numerous occasions received a few final mailing of stuff that was in the QSL queue, but not for a long time. Inside tonight’s packet were two QSLs: 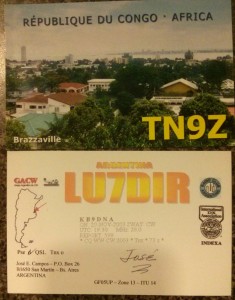 In my always-instant-on world where a 5 minute Google outage triggers panic, getting mail about stuff from ten years ago is a pleasant alternative.