In December 2012, I wrote about why I quit and what my thoughts about the decision were at the time. That post resonated with a number of people. I received emails strongly agreeing with main points, and it was even discussed for a few minutes on a popular podcast (54 minutes in).  I still agree with everything I wrote then, but I now have a bit more to add.

Quitting Facebook was always a bit of an experiment. I say that not because I planned to return after some amount of time, but because I was very interested in seeing the effects of the action on myself and others. For example, if I was wasn’t accessible via Facebook, would traffic via other channels increase? Would I discover better patterns of keeping in touch that were being ignored due to the convenience of Facebook? Most importantly, would I get to a point where choosing to not use Facebook would leave me feeling better than before?  The results: no, no, maybe.

It is no exaggeration when I say that communication with my “extended circle” (mainly family, a few friends) is through Facebook or not at all. I found that out right away. Writing emails might yield a response but was hardly a substitute for something intended to be a broadcast update of the, “Hey, look what our son did”, kind. This blog won’t be read by said people (though it continues to be, as always, an invaluable journal for me). And posts to Google+, Twitter, Instagram, etc.? I might as well save the pieces in /dev/null. The people I most want to share with are only going to be available on Facebook.

So, the communication lines are down, but maybe it’s not that bad, right? After 15+ months I can say it’s not that bad, but it’s not that good either. I’ve always been the solitary type and it hasn’t been particularly jarring to slowly lose track of what everyone else is doing. The problem becomes: what am I left with? For a few weeks the silence was refreshing, but I could have gotten that by simply not using Facebook for a while. Over the long term, an unhealthy apathy formed. Almost all of my family and friends are outside of my daily life, but they still exist! They want to know how I’m doing and I want to tell them. I care about their significant life events. I’ve realized—only after an extended period—that turning all that off to avoid some of the ill-effects of Facebook is a bad trade for me

To fix this, I’ve signed up for a shiny new Facebook account. (Having provided literally nothing more than my email address, it promptly identified and suggested I friend just about every person I’ve ever met. Privacy!)  I’ll probably be a little more judicious with my friending (or whatever it’s called now), but I’ll be a lot more quick to mute. I hope to regain some of the good of Facebook and less of the bad.

And I hope that’s all I have to say about Facebook.

The NSA leak is the most interesting news I’ve seen in years.  We might as well be watching The Bourne saga play out in front of us.  And unlike almost all media sensations, this one is centered on a hugely important issue that can and must be decided by the public.

There are lots of polarizing issues the circulate through the news cycle, but frankly I tire of most of them. I know where I stand on guns, abortion, gay rights, etc… and these things will move and evolve over time, but they’ve been out in the open for a long time and usually boil down to what one person thinks others should be able to do. The NSA issue is different. This is me deciding what I think another third party should be able to do to you. Furthermore, the central party—the NSA—may well be the most secretive, mysterious department in the US government. Number of employees: Classified.   Annual Budget: Classified.  Fascinating stuff.

Probably the most intriguing/scary part of the story as I write this is the contents of the “other” slides in the 41-page presentation that was leaked by Edward Snowden. (The slides that would have graciously been declassified in 2036.)  We’ve only seen 7 pages so far.  He claims that he didn’t want to recklessly release information and put people in danger, yet two news organizations are refusing to run any more of the material (so far). On the other hand, the WikiLeaks people are champing at the bit to get at and release it. (see Wired article).  What’s in there???  Here are some wild guesses (of the more salacious variety):

I’m most certainly not a conspiracy nut and rarely think about this stuff, but when reputable news outlets have 30 pages of source material that are too hot to handle, my imagination starts to run wild.

After 9/11, there was a lot of talk about how we were more vulnerable since our human intelligence in the Middle East was weak. After the Iraq invasion, a lot was said about the WMD intelligence failure.  Everyone thought that better intelligence gathering and dissemination were a priority.  It was certainly a safe political position to take.  Who is going to get booed off the stump for demanding better intelligence about our potential enemies? And so we start to hear news reports that often would make mention of “chatter” and whether intelligence was “actionable”.  What did we think that chatter was?  I can image the NSA analysts reading the news now and saying: you wanted better foreign intelligence, you gave us billions of dollars, we got better intelligence and there hasn’t been an attack like 9/11 since.  But, um, a whole lot of domestic intelligence got necessarily swept up at the same time.

What will the political responses to this be?  To my conservative, small government, strong defense friend I ask: are you really up in arms at the prospect of government taking your large magazines, or telling you that you have to buy health insurance, but OK with them simultaneous spying on you?  Do you trust them to use all that information wisely, ethically? To my liberal friend who is crying that civil liberties such as privacy must trump all else I ask: if the NSA comes out an says, “Fine… but here is a list of attacks that have been thwarted thanks to this intelligence”. Will you tolerate an increase in successful attacks against the US? Will you tolerate possible military escalation?

As I said at the opening, this is a fascinating and important story. When the intelligence agencies of the US were formed, who could imagine the depth and breadth of connectedness that the world has achieved?  They’ve obviously used the technological advancements and behavior changes to their advantage.  People are handing them terabytes of information everything second.  It’s time for the US to really ask itself: given the way people live their lives today, what is an appropriate level of privacy?  This NSA leak story tees up that question.  I can only hope that the press really runs with it, really digs in, and that the American people don’t demand a return to the typical news fluff.  The conversation needs to take place.

It is Memorial Day Weekend,  we decided that it was a good time to introduce Ben to strawberry picking.  After all, strawberries are one of his favorite food.  Ben calls it “mo mo”.

Jim drove us to Jefferson, OR which is about 20 minutes away from our house.   To get to the strawberry patch we had to drive on dirt road with Jim’s little prius :-).  Nice ;-). 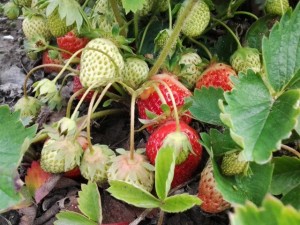 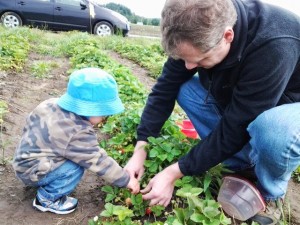 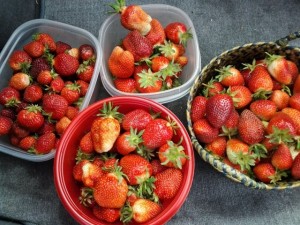 We had a good time picking and munching strawberries.  Ben has a knack on picking strawberries that are still green ;-).   He seems to be enjoying himself.  No complains from him the whole morning.

On the way home we stopped at Cafe 99 for lunch.  I had french dip sandwich and Jim had a patty melt.  They were both very tasty.

My name is Ben

And I want to be ten

So I can run around Daddy’s den

I found a couple of Indian curry recipes that I have been meaning to try.  I finally decided to give the Chana Masala recipe from http://www.cookingandme.com/2013/03/chana-masala-recipe-chole-masala-recipe.html and Chapati recipe from http://allrecipes.com/recipe/indian-chapati-bread/  a try.   I love chickpea curry and definitely had a taste for the leaner version of indian bread other than naan.

I think the recipes turned out pretty well.  Ben who is 18 months now, loved it too.  Both recipes only took 30 minutes to prepare together.